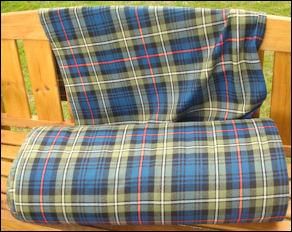 For more Information on our various Tartans and the history and meanings behind tartans, please visit our UK Society's page.

Authenticated by world-renowned tartan & weaving authority, James Scarlett, a fresh Mackenzie tartan has been discovered, reminiscent of the current "Ancient" colouring but with subtle differences. The material has been woven to match the original piece dated from the 1820's. The white stripe originally thought to have been of silk is woven with partly a cashmere interface.

A bolt of this material has now been woven and if you wish to have a kilt made of this unique set, then please contact: ecommerce@clanmackenziesociety.co.uk

The Mackenzie Tartan is the regimental tartan of the Seaforth Highlanders, which were raised by Mackenzie, Earl of Seaforth in 1778. Wilson's 1819 pattern book records various widths and weights of cloth suitable for different ranks in the regiment. There is a certified sample in the Collection of the Highland Society of London, signed by Mrs. Mackenzie of Seaforth, 1816.

The Mackenzie tartan as we know it today is a military tartan and was developed by the Mackenzie Lord MacLeod's 73rd Highland Regiment (and continued later by the Seaforth Highlanders), which was taken from the an early version of the Black Watch (developed about 1729) and had Black, White and Red lines added. In fact most clan tartans today were developed since the military Highland Independent Companies introduced the idea of using the pattern for identity between 1725 and 1739. With exceptions there are very few examples of tartan patterns being used for clan identity prior to 1700, moreover, it was the cap badge, usually a plant or ribbon, which was used for identity. However, there is evidence that regional tartans existed. This would explain why different tartans were seen being worn by the same clan at the battle of Culloden.