- 1st: a mountain azure in flames proper (MacLeod of Lewis)

- 3rd: gules three legs of a man armed proper, conjoined in the centre at the upper part of two of the thighs, flexed in triangle, garnished and spurred, or (Isle of Man)

- 4th: argent, on a pale sable an Imperial Crown proper, within a double treasure flowered and counter-flowered with fleur-de-lis gules (Erskine of Innerteall).

Hereditary Chief of the Clan MacKenzie 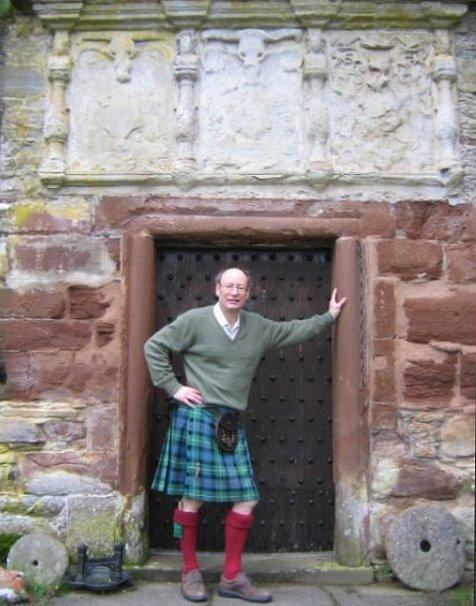 It was a Mackenzie who best defined the term ‘Chief’ when the Lord Advocate, Sir George Mackenzie, wrote in 1680 ‘Chief; for so we call the representative of the Family, from the French Word chef, a head: and in the Irish with us the chief of the Family, is call’d the head of the Clane’. Such has been the legal prestige of Sir George’s much cited assertion that the Chief of a Family and Head of a Clan are synonymous that it was upheld by the Scottish Court of Session in a case as recent as 1941.

The first Mackenzie Chief in the true sense might be said to have been Alexander the Upright in the 15th century. The nineteenth century historian, Alexander Mackenzie, commented that prior to the time ‘the line of Kintail is but a narrow thread’, not one of the six previous chiefs leaving more than one legitimate son to succeed him. This may be something of an exaggeration, since it seems unlikely that there were not more male offspring over the course of two centuries. However, it appears that he was the first of the Mackenzies to produce sufficient sons for the family to become an embryonic unified clan and it has been said that only with Alexander do the Mackenzies begin to emerge as a separate unit from their Matheson cousins. It is notable that, while there were three illegitimate cadet branches of the first lairds of Kintail, all identified themselves as separate clans until into the seventeenth century. The descendants of Murdoch Riach, for example, the illegitimate son of Kenneth of the Nose, known as Clan Vurchie (the Gaelic for Murdoch), fought alongside the illegitimate descendants of Murdoch of the Cave in opposition to their cousin, Alexander the Upright. It was only in the seventeenth century, when the Mackenzie power base had been firmly established, that they associated themselves with the wider Clan, and we find Murdoch Riach’s descendants, such as Colonel Daniel and Captain Bernard, styling themselves Mackenzie, rather than using their former patronymic, MhicVurchie.

After a period of feuding, particularly between the Mackenzies of Kintail and the Mackenzies of Gairloch, who disputed the leadership of the family, by the end of the sixteenth century one could begin to speak of the existence of a powerful unified clan under the strong leadership of Mackenzie of Kintail. The relationship between the Mackenzie chief and the cadet branches of the family had by then become one of mutual support. As a final symbol of this reconciliation, the first Earl of Seaforth was said to have had removed a large cut in a table made by one of John Glassich of Gairloch’s servants when he made an attack on Coinneach na Cuilc, his Kintail rival. The Earl was said to have declared that ‘he loved no such remembrance of the quarrels of his relations.’ It was this relationship that played a significant part in the family’s success in securing their remarkable power base in Ross-shire. Indeed, so close-knit was the family at this time that genealogical analysis from the copious material compiled by John Mackenzie of Applecross and Dr. George Mackenzie makes it clear that it was not uncommon for a member of the family to have as many as eight descents from a single chief within the space of only five generations.

There was a difficult period of mixed allegiances after 1688 when the Clan’s Roman Catholic Chief chose to continue in his support for the exiled King James, while the majority of Protestant Mackenzies remained loyal to the Government. However, following the return from exile of their youthful and charismatic Chief, William 5th Earl of Seaforth, the majority of the clan by 1715 had reconciled themselves to his leadership. Such was his authority that of a Jacobite army totalling 6,209, Seaforth accounted for 50 horse and 1,100 foot, while the Mackenzies of Applecross and Fairburn brought a further 350 and 400 foot respectively to the rebel forces. Family letters from this period show that the family hierarchy survived unquestioned even following the Chief’s forfeiture and exile after the second failed uprising of 1719 when Seaforth continued to be regarded as head of the family. Such was his power in the north-west of Scotland that he proved himself to be in an extremely strong position to negotiate with the Government for his pardon in 1725. Social and civil order in the north of Scotland was still to a large extent dependent on magnate cooperation and it only returned when the Government conceded that point and allowed Seaforth to take up his chiefly role once more.

The widely held respect that the Chief held within his Clan continued further into the eighteenth century. John Home, writing of the situation in 1745 was quite clear what the clan was about and how links were maintained between even the most distant of kin: the Highlands are divided into a number of territories and ‘Each of these districts, called by the natives a country, was the residence of a clan or kindred, who paid implicit obedience to the Cean Cinne, or head of the kindred. The sirname [sic] of the chief was the name of the clan, and the title which he bore constantly reminded the Highlanders of the kindly origin of his power; for the Cean Cinne was the kinsman of his people, the source and fountain of his blood… a number of the clan constantly attended him both at home and abroad… to bind the kindred faster together, the cord of interest (in the most ordinary sense of the word) was drawn strait between them: the lands of the chief were let to his nearest relations upon very easy terms; and by them parcelled out to their friends and relations, in the same manner. That consanguinity, the great principle of clanship, might not lose its force by being diffused amongst a multitude of men, many of whom were far removed from the chief, there were intermediate persons, called the chieftains, through whom the inferiors looked up to their chief.’

It was precisely such an allegiance that allowed Francis Humberston Mackenzie, the last Lord Seaforth to raise so many troops for his (now Hanoverian) King during the Napoleonic Wars at the close of the 18th century, with the assistance of his kinsmen Mackenzie officers. Thus the martial potential of the clannish system, involving an identity based on a common descent that had its roots in the tradition for the landless younger sons to follow military careers in the defence and support of their wider family, far from being an outmoded anachronism, not only continued to work in the interests of the leading Mackenzie gentry, but was also fundamental to the advancement of the British Empire.

It was famously with this Lord Seaforth’s death in 1815 that the elder line of the Mackenzies ended so that, in the words of Sir Walter Scott, ‘Of the line of Fitzgerald remains not a male to bear the proud name of the Chief of Kintail.’ In fact, George Falconer Mackenzie, 4th laird of Allangrange was in 1829 served heir male to his ancestor, the Hon.  Simon Mackenzie of Lochslin, and heir male in general to Simon’s  father, Kenneth, 1st Lord Mackenzie of Kintail. He matriculated arms accordingly in the Office of Lord Lyon. However, on the death of his grandson, James Fowler Mackenzie, in 1907 the chiefship was effectively dormant until, on the 12th June, 1980 Lord Lyon King of Arms recognised Roderick Francis Grant Mackenzie, Earl of Cromartie, as the lawful Cabarfèidh, Chief of Clan Mackenzie. It is his son, John Ruaridh Grant Mackenzie, 5th Earl of Cromartie, who is the current Chief.

The term Cabarfèidh, meaning ‘deer’s antlers’, is, of course, a reference to the Chief’s coat-of-arms, although it is difficult to know when it was first used as a term for the Mackenzie Chief. It is known that the last Earl named the yacht he used to take him between the mainland and the Isle of Lewis Cabarfèidh. However, the first known use in this precise context was when the last Lord Seaforth’s daughter, Lady Mary Stewart-Mackenzie, who took on the mantle of Chief, wrote to Sir Walter Scott regretting her inability to attend George IV’s famous visit to Edinburgh in 1822: ‘Poor Cabarfèidh’ she wrote, ‘is very different to what it was.’